Tonight, we loaded up Miles’s Pack ‘n’ Play and headed over to our friends’ place to watch the Academy Awards. Miles’s birth prevented us from participating in a viewing party in 2018, and this year I hoped we could manage to attend a party while also not depriving Miles of any sleep. With the show starting at 8:00, I assumed Miles would be in a deep slumber by the time the the supporting actor awards were doled out.

Anyway, here he is two hours into the broadcast: 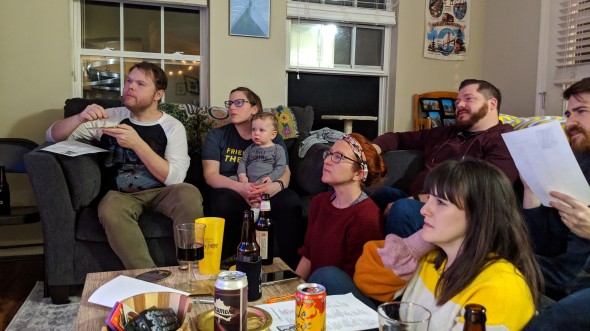 Despite having seen none of the nominated films, save a few scant moments of BlacKkKlansman, Miles refused to go to sleep and was deeply invested in the show for much of the night. His attention only wavered when he discovered and started playing with the coasters on the coffee table or when the cat walked into the room (he happily pointed at it and said, “Dog!” over and over, while Jaclyn’s attempts at correcting him went largely disregarded).

Of course Miles was out as soon as we nestled him back down into his car seat. He just can’t stand going to bed when he knows there’s a party going on. Hopefully Miles is this enthusiastic when he has a party of his own next weekend!