Friends and family descended upon Charlotte today to pledge fealty to young Miles, who just celebrated his first birthday this week. Our friends George, Sam, and Audrey came into town around 11:30 last night, at which point Sam set about making Miles’s birthday cake. Miles, who had already gone to bed for the night, was nonetheless rustled from his slumber and needed to know what was going on. He was delighted to find that his friend Audrey had arrived!

Of course, he had no idea what the next day held in store for him. Audrey was only the tip of the iceberg, and twelve hours later Miles was swimming in attention. Things got a little overwhelming when everyone started singing “Happy Birthday,” but thankfully his response to today’s “smash cake” was a little warmer than the one we put in front of him on Monday that prompted him to attempt to escape from it. This could be due to the cakes bearing the resemblance of the majestic occupants of Ahch-To — the porgs. 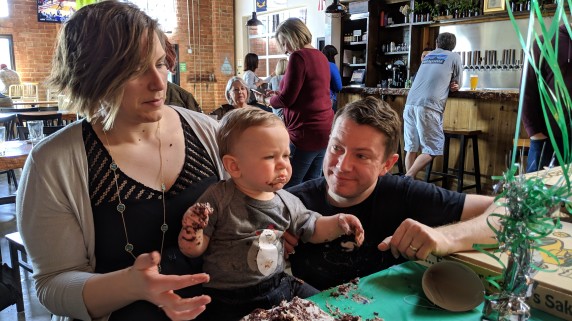 Naturally, Miles received a bounty of gifts, but perhaps none so unexpected as the rocking chair my grandparents gave to me as a wee lad, now gifted to him by his own grandparents. Miles took to it quickly!

The day ended with a family dinner at Brewers at 4001 Yancey, a location that is by now well-known to Miles as a flirtation hotspot (and this trip was no exception).