Before we headed off to visit our respective families for the holiday, we took a few minutes to let Miles ransack and pillage his Christmas stocking. After insisting for several minutes that he’d rather have my stocking (despite my insistence that this would prove FAR more boring than his), Miles finally opened his own and emptied it of its treasures.

First, Miles discovered his own lightsaber, a relic from a bygone era (seriously…I’ve had it since The Phantom Menace was released). 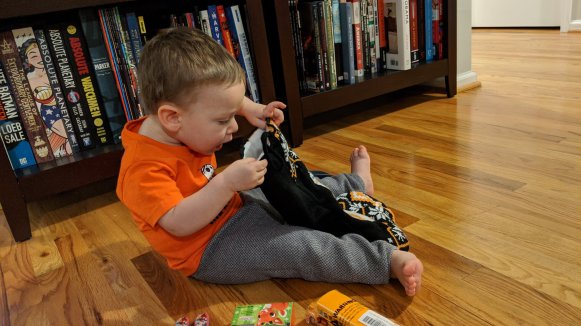 …and one of his favorite things — a yellow school bus.

This may be Miles’s second Christmas, but its his first with the awareness needed to really figure out what this holiday is. We probably could’ve just ended Christmas after the stocking and had a perfectly content child. However (sadly, maybe?), tomorrow is sure to bring with it a much larger bounty.